Read about the history of the Art Prize here

Congratulations to Loribelle Spirovski, winner of the $30,000 Naked & Nude Art Prize 2021, for her work ‘Moving House’.

Nick Stathopoulos, ‘Alone in the half-light’

View the catalogue for the Naked & Nude 2021 Art Prize here

“Wendy Sharpe is one of Australia’s most awarded artists, and as a former finalist and winner of the Naked & Nude Art Prize, we’re very pleased to be welcoming her back in 2021 to judge the competition,” said Gallery Director, Rachel Piercy.

For the first time, the winner for the Naked & Nude Art Prize 2021 will be announced via social media and websites on Saturday 28thAugust at 4pm.

For the Naked & Nude Art Prize 2021, 62 artworks have been selected from a record number of entries from all over Australia.

The artworks include sculpture, painting, ceramics, drawing, photography, installation and video – highlighting the diversity of approaches to representation of the human form by contemporary artists in Australia.

We are delighted to announce the 60 finalists for the Naked & Nude Art Prize 2021:

Entries have now closed.
Finalists will be announced on 16 July 2021 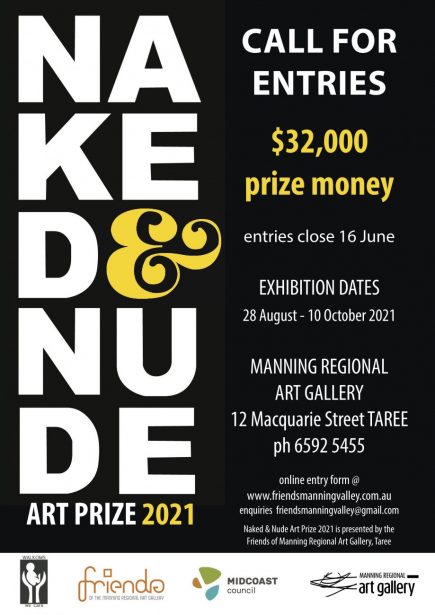 Congratulations to Michelle Hawkins winner of the $1,000 People’s Choice Award for her work ‘Kate’.

Judge Denise Mimmocchi, Senior Curator Australian Art at the Art Gallery of NSW made these comments about the winning work:

“This beautifully composed painting may be a landscape (or seascape) but it is one that pivots around the formation of the two female figures. Their connection to each other and to their beach setting is the true subject of the work. Despite the agitated surface texture of this painting; one that encapsulates the perpetual motion of the ocean setting, the work exudes a great sense of calm and intimacy. The figures here do indeed appear as ‘sea creatures’ as they are drawn into their environment, and lead us, as viewers, in with them. What small detail, we wonder, that has caught their attention on the shore?

The painting is ultimately such a successful one as it is charged with a strong sense of the physicality of the figures and the human connection between them and their environment.” 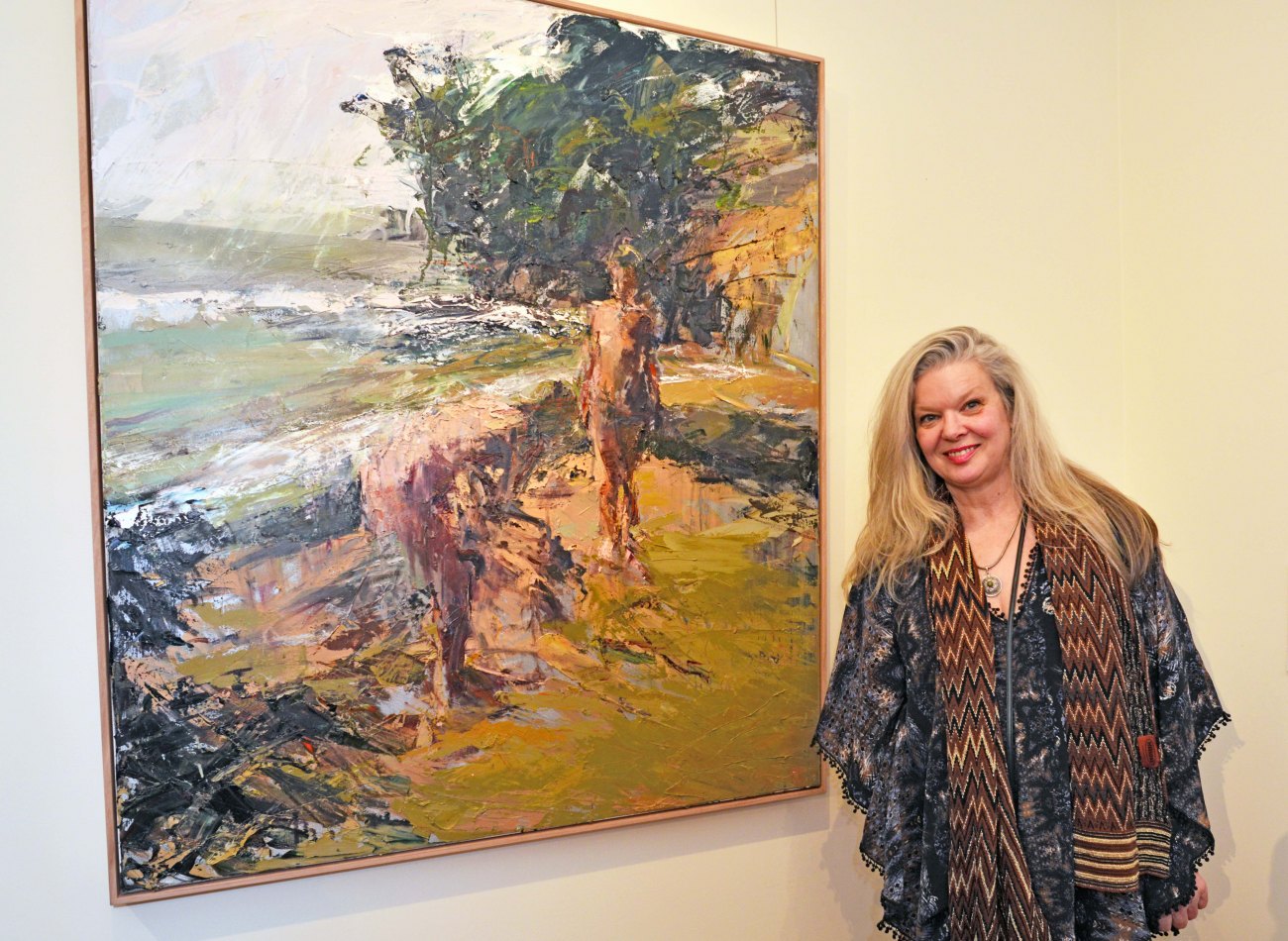 You can view the 2019 catalogue of finalists here.

The Gala Opening of the Naked & Nude Art Prize® 2019 will be at 6:30 PM be on 7 September 2019 at the Manning Regional Art Gallery. You can but tickets at the door on the night, at the Gallery during opening hours, or at Eventbrite (click here). You can also buy tickets in Taree at Bass N Blues Music and Margaret’s Underfashions.

The shortlist of has been revealed for Naked & Nude Art Prize 2019 with 58 artists selected from a record number of entries from artists all over Australia.

The artworks include sculpture, painting, ceramics, drawing, photography, installation and video – highlighting the diversity of approaches to representation of the human form by contemporary artists in Australia.

The winner of the prize will receive $30,000 prize money and the winning artwork becomes part of the Gallery’s collection. The judge for the 2019 award is Denise Mimmocchi, Senior Curator Australian Art at the Art Gallery NSW, with the winner announced at the Gala Opening event Saturday 7 September 6.30pm.

The popular People’s Choice voting will take place from September 7, 2019, until October 13, 2019, giving locals the chance to vote for their favourite artwork. The People’s Choice Award of $1000 will be announced on 15 October 2019.

Friends of the Manning Regional Art Gallery are pleased to announce that Denise Mimmocchi,
Senior Curator Australian Art at the Art Gallery NSW,
will judge the Naked & Nude Art Prize® 2019 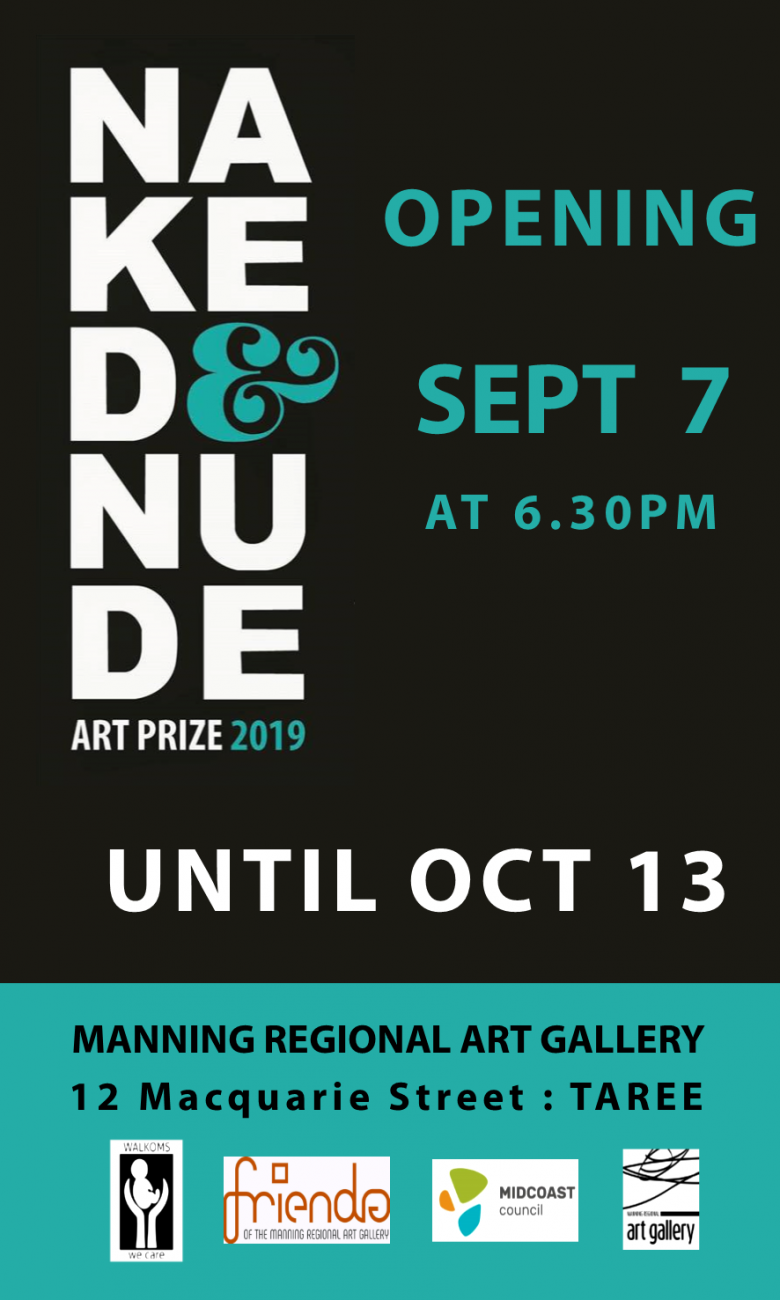 “Naked & Nude refers to two things: firstly the great tradition of the Nude: a person who is bare with no covering or decoration.

Secondly, a wider definition: something that is revealed, laid bare, unmasked or vulnerable”.

Melbourne artist Dagmar Cyrulla is the winner of this year’s $16,000 acquisitive Manning Art Prize: Naked and Nude for her oil on linen entry titled The phone call IV.

Winners were announced by judge John McDonald, art critic for the Sydney Morning Herald, on 2 September at the exhibition’s gala opening at the Manning Regional Art Gallery.

The competition attracted 335 entries, with 60 finalists selected for exhibition.

Mr McDonald said the field of artists was “of a very high standard”.

Second prize of $3000 went to Peter Churcher from Port Douglas for the oil on canvas work titled Kaue.

The Robin Norling Bequest Prize of $1000 was won by Nick Mourtzakis from Collingwood, Victoria for his oil on linen work Cadmium Green.

Highly commendeds were awarded to Zai Kuang from Clayton, Victoria, for the oil on canvas Dry Season; Stephen Bird from Maroubra, NSW, for glazed earthenware Delilah and Samson and Mark Feiler from Brisbane for his archival print on cotton rag AlanaBlu2.

The winner of the Manning Art Prize: Naked & Nude ‘People’s Choice’ Award is Vicki Sullivan of Victoria. Vicki’s painting, ‘Back Study of Brianna’, proved the firm favourite of visitors to the exhibition and she wins $1,000. Congratulations Vicki!