The Manning Regional looks like the Art Gallery of NSW with Jocelyn’s work on the walls: 30 years of oils and watercolours to which the only applicable adjective is masterful. Her long compositions play out like melodies: myriad figures in motion, turning, twisting, gesticulating, leaning, living. Jocelyn has only ever worked in the classic mediums, which make no concessions to drying time or solubility: they just glow.

“I think a lot of people come into a room like this and think: well, thank goodness it isn’t one of those contemporary art shows,” says curator John Cooper at the opening. “But I encourage you to look again and look more deeply: Jocelyn is anything but conventional.”

For one thing, she likes painting blokes best. Fishermen especially. Also swimmers and sunbathers and rockpoolers. Her partner, Robin Norling, senior education officer of the Art Gallery of NSW, had a house on the beach.

A ripple of agreement goes through the crowd. It’s been a year since Robin’s death, and Jocelyn’s grief is still palpable. She repeats John’s sentiment.

“But,” she says, “Through his teaching, he lives on. And I was his best student.”

When I sit down with her a week later, on a day when she’s painting miniature portraits for a $20 donation to Friends, and the gallery smells of liquin and turps, I ask her:

“So, was Robin your teacher?”

Jocelyn gives me a curious look. I explain my reasoning. As a newcomer to the area, I only knew them as a distinguished older couple who appeared from time to time at openings amid reverential whispers.

“He went to Julian Ashton,” she says. “We both did. But I didn’t know him then, I just knew of him, as a brilliant student. I didn’t actually know him until he came to work for me at Meadowbank, and I chased him down with an Authority to Travel form.”

She laughs a rare laugh. I’m speaking with Jocelyn Maughan, head and founder of Meadowbank TAFE Art School, which under her leadership became renowned for drawing and employed hundreds of teachers.

She does have an enviable self-possession, one earned from a lifetime dedication to craft. She seems satisfied with the exhibition, leaning back in an armchair, surveying. She’s about to turn 80. When she moves, she has what I think of as a painter’s gait, a little stooped but certain, eager, always ready to seize a moment.

“I’m the artist,” she says, to a patron passing. “I can help you if you have any questions.”

“Hello, young man,” she says to another. “Do you paint and draw yourself?”

“Hmmm?’” Jocelyn asks, in the middle of a portrait, her eyes on her subject.

“Oh well,” she says, pleased but giving a little shrug. “When you teach so many…”

She still loves teaching. When she sees my interest, she invites me to sit and watch over her shoulder. She works simply, on a board in a corner by a window, from a simple wooden box containing a limited palette of quality paints, in an apron jewelled by her brush.

“I’m fascinated to see you work up from a dark ground,” I say. “Because the conventional wisdom-”

Jocelyn makes a dismissive noise, as if to tssk away all convention for good. It’s uncanny how much she reminds me of my Jewish granny, also a painter and a teacher of painting, also frank and eccentric.

I watch her knock out three portraits in a row, an hour a piece, with short breaks for tea in between. If anything, she seems energised by the work. I’m amazed by the way she captures not just likeness but character, and more than that which meets my eye. Of a forensic psychologist, comes a portrait light and youthful.

“You almost have to almost fall in love with your subject,” she murmurs to me. “But you don’t tell them that.”

Though she no longer holds classes, she’s generous with her knowledge. She’ll sit with anyone and their sketchbook.

“I think Robin and I admired each other as teachers,” she says. “We believed the same things about teaching. And when I retired from TAFE at 55, it was Robin who said: You can do this. Get a studio. Be an artist. He was a great teacher and I benefited, you see.”

“Ahh,” I say, beginning to understand.

“Robin was the one connected to this area,” she continues. “We chose not to combine our assets, so he bought in Blackhead and I bought in Patonga, which is why this exhibition is called Blackhead to Patonga.”

I take another long look around, at the scenes of our famously beautiful north coast, of its characters and communities, as she and Robin must have seen them, travelling and making pictures together for half a lifetime.

“There’s a rhythm to it”, she tells my TAFE group, a week later, pounding on the gallery wall with both fists to show them how it plays across a piece. “Art is just like music.”

She takes us on an impromptu tour, revealing the secrets behind each work, explaining the composition and colour theory, sharing her techniques.

“I could hug you,” I say afterwards.

“I’ll take that,” Jocelyn says, and gives me one.

Jocelyn Maughan’s retrospective, Inspirations: Blackhead to Patonga, is on at the Manning Regional Art Gallery until March 25. 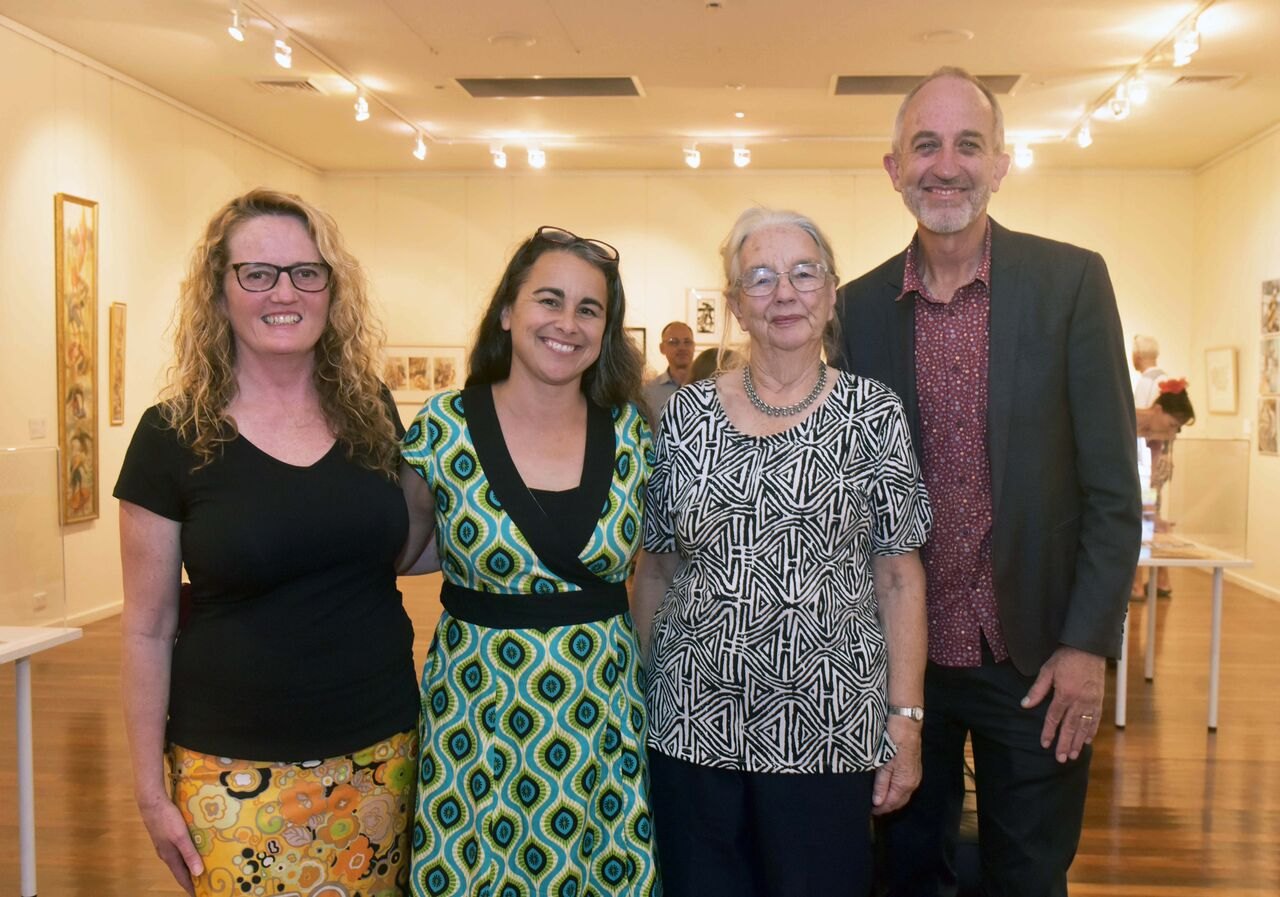 Friends of the Manning Regional Arg Gallery publish Mosaic, a newsletter about what’s been happening with the Friends. If you’ve missed them, or want to read them again, you can download them below.   Mosaic Issue 4, March 2019 Mosaic Issue …read more

We’ve been a bit (actually really, really) tardy in keeping the Happenings page up to date with news of the Friends and the Gallery. Apologies for the long silences. It seems that almost everyone prefers going to Facebook instead of …read more

Come to our AGM in September

Have you ever thought about contributing to the work of the Friends of the Gallery Committee in providing support for functions, fund raising and changeover of exhibitions to name just some of the ways we support our fabulous regional gallery? …read more

I went to Jo for help. My years at art school had left me a capable “map-maker”, able to plot out a model on the page, but my drawings were joyless, and I didn’t draw for pleasure anymore. Jo was …read more

The Manning Regional looks like the Art Gallery of NSW with Jocelyn’s work on the walls: 30 years of oils and watercolours to which the only applicable adjective is masterful. Her long compositions play out like melodies: myriad figures in …read more

Samantha Everett sees what others don’t. A subtle pinstripe here. A flicker of lace there. The hint of gold that brings an otherwise beige outfit to life. Like a forensic scientist, she finds in the details the stories behind the …read more

The installation for The Art of Wool is underway: this is high fashion + high art + Australian history and it’s going to be big. “Dress up,” Rachel says. There’ll be celebrities and dignitaries.

The new Director and a journey unfolding

Sometimes I’m glad to live now. Like when I heard that Rachel Piercy had been elevated to the role of Director, an appointment that finally makes our whole team of angels (Jane Hosking, Ali Haigh, Julie Slavin) official. Rachel was …read more

The winner of the Manning Art Prize: Naked & Nude ‘People’s Choice’ Award is Vicki Sullivan of Victoria. Vicki’s painting, ‘Back Study of Brianna’, proved the firm favourite of visitors to the exhibition and she wins $1,000. Congratulations Vicki!

Ali Haigh has stolen a roomful of hearts. ‘When did it go on exhibition?’ A stunned gallery-goer asked me. It was the Sunday after a jubilant opening night and there were red stickers everywhere. So captivating is Pattern to Print, …read more